Apparently the good dive bars still left in Seattle are in the suburbs. For our final session of “Life Drawing in the Real World”, we took a little excursion into the eponymous real world to draw the locals. I found the Central Club in downtown Kirkland, Washington through a quick search of Google maps: The interior camera shot told me it was the place, which was confirmed when I walked in and was immediately greeted warmly by the bartender and the three regulars sitting at the end of the bar. Everyone was so friendly, I thought for a moment I was back in Cleveland and not in the reputedly chilly Pacific Northwest (which reputation is greatly exaggerated, by the way).  Since the bar was nearly empty and my students would soon outnumber the other patrons, I figured it was best to tell these nice people what we were up to. People’s reactions over the course of the evening ranged from enthusiasm, to utter indifference (which is what you want), to the single hostile inebriated patron who soon forgot the point she was trying to make about the questionable legality of our activity. 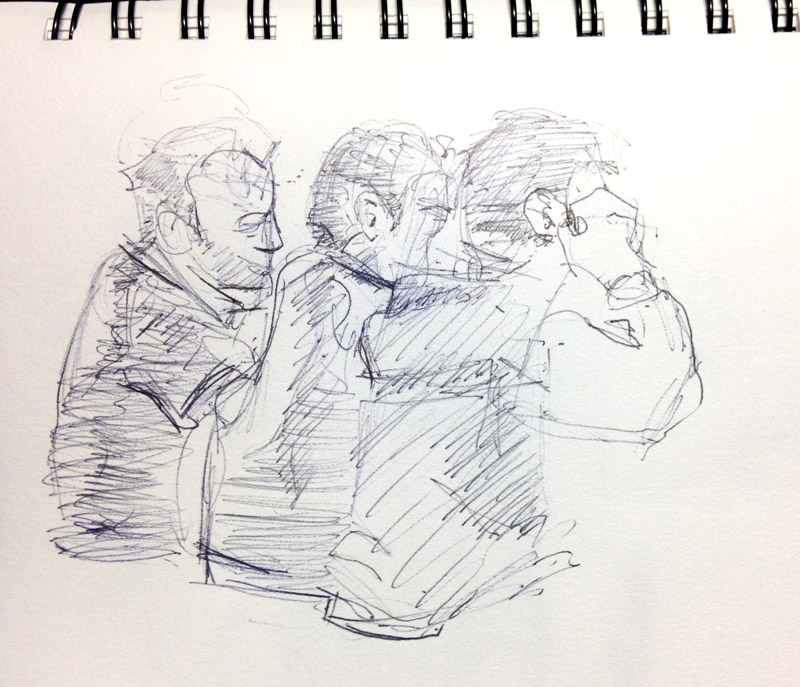 People lined up at a bar actually make a nice composition, and tend to stay put. Before the bar started filling up, they were our only choice of human subject, along with their busy liquor-bottle-and-lottery-poster-dotted backdrop. This gentleman’s hand moved so quickly across the gambling touch-screen that it was mostly drawn from a composite memory of hands in my head, but visual memory is generally what you rely on when you draw moving people. 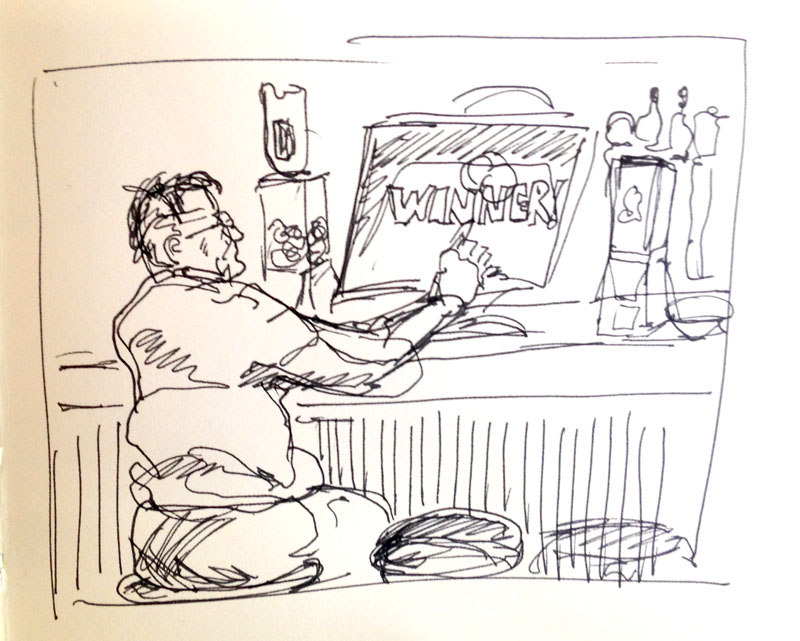 It was also some of the students’ first experience drawing in public. Some people, mostly women, absolutely hate it. They are either self-conscious about the drawings themselves, or fear that staring at people will draw unwanted attention back on themselves. Hallie Bateman, writing in the Awl, created an illustrated guide to drawing people in the subway that is both hilarious and useful, offering tips on making yourself invisible. Paul Hogarth suggests starting out by drawing through a window (presumably from the inside out or you’d look like a perv) or positioning yourself next to a mirror to sneakily draw people’s reflections. (Creative Ink Drawing, Watson-Guptill 1968)

We were all very open about our intentions, and we had the safety of numbers, but I did have to fend off a pool player or two (who, by the way, make for great gesture drawings) who were a little too enthusiastic about being drawn by a table of women, perhaps misinterpreting the nature of our interest. 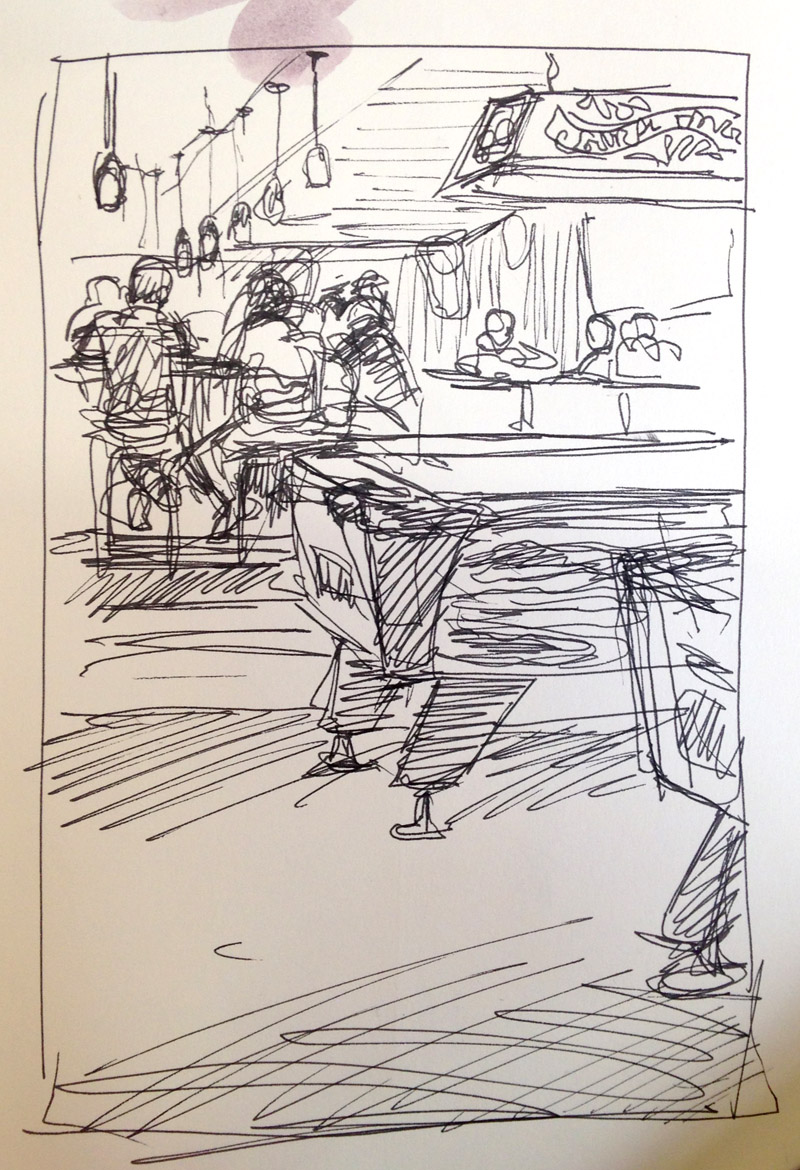 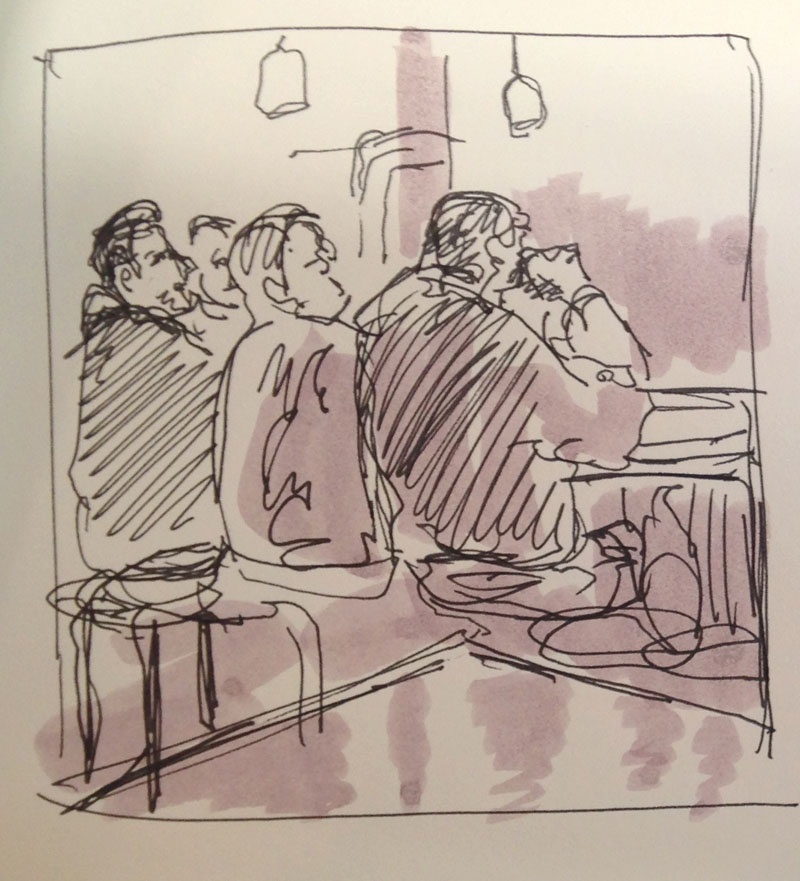 One of the tipsy pool players, watching us scribble to catch up with their (self-consciously) showy arabesques did make the offhand remark that we “needed a camera.”  Which is, first of all, funny, because this was a drawing class, and secondly, indicative of a common misperception that a camera is somehow a better, faster version of the human eye and brain and hand. Besides the entire social and human implications of looking, thinking, talking, and drinking with people whom you are representing, BESIDES all that, a camera is actually incredibly inefficient in many visual situations, a darkly lit bar among them. Here is my first attempt at documenting the scene mechanically: 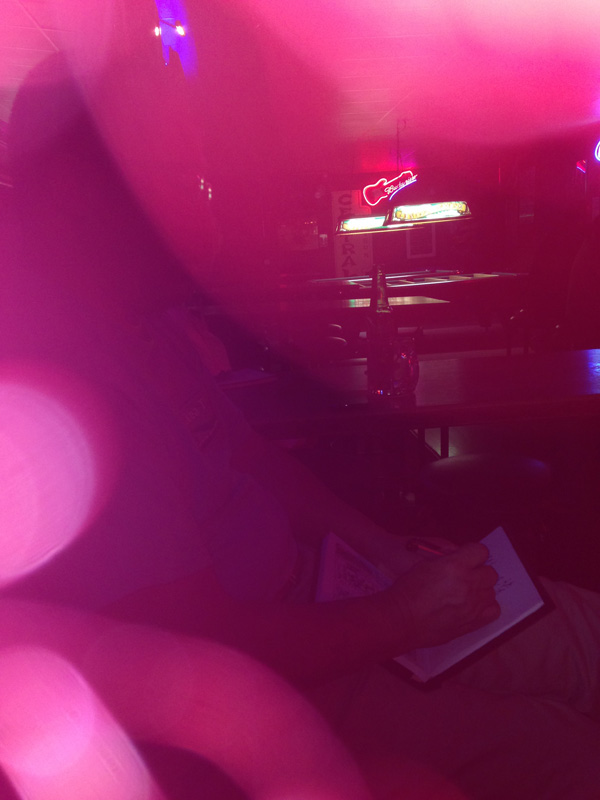 The camera on my phone “thinks” that the neon guitar is the most important thing in the frame, does all kinds of wacky things with the lights, and you can barely make out the hand and sketchbook in the foreground which I was trying to capture.

I did manage to get one decent photo after I turned off the flash, but the sketches, even those of beginners, actually documented a lot more information than the camera, as well as being a darn sight more interesting. 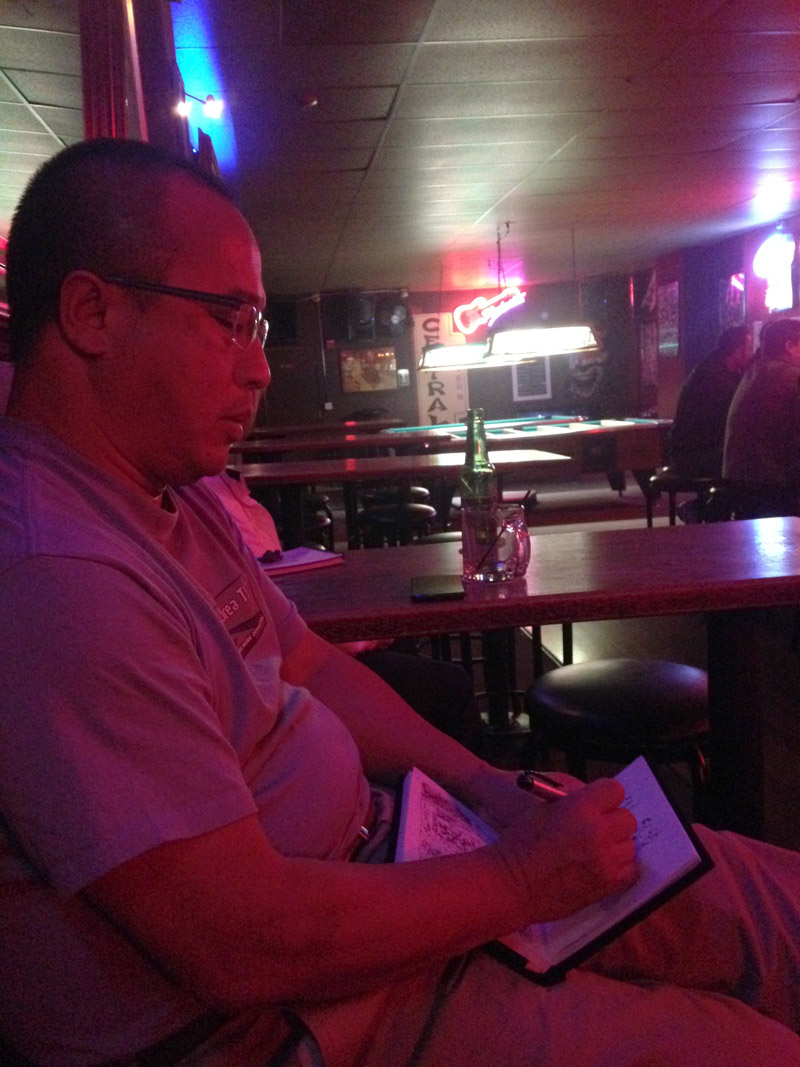