Opening reception is Thursday February 7, 5-8pm at Atelier Drome, 112 Prefontaine Place South. After that, hours are M-F 8am-5pm (make eye contact with the front desk person to be let in). Show closes April 26, 2019.

I pilfer images from old magazines—feral children who are up to no good, beatific high-heeled homemakers, cigarette-smoking proto-hipsters, futuristic dream houses, gizmos tucked into tiny spot ads in the back pages—extract them, mix them up, put them back together into new configurations. Much like a recipe for twice-baked potatoes or some other mid-century labor-intensive foodery. These advertisements are the sacred texts of capitalism, and essential records of the history of our collective aspirations. Our aspirations seem to have changed very little since the advertisements were first concocted. We continue to lust after real estate, buy more stuff, and lovingly cradle electronic devices in the palms of our hands.

Next month, I’ll be showing some brand-new paintings that look at the golden age of the automobile (for which we are paying dearly), along with some paintings of the last few years that concern themselves with gloriously futuristic spaces of yore. Travel Brochures for a Past Future opens February 7 at Atelier Drome, 112 Prefontaine Place South, in Seattle’s Pioneer Square. There’s an opening reception from 5-8 PM on February 7 during the neighborhood’s first Thursday art walk. The show continues through April 26, and is viewable during business hours (8-5 weekdays) and by appointment.

Composing in a circle continues to challenge, inspire, and occasionally frustrate me. It’s damn harder than it looks. According to some theories, that is due to its gravitational pull being in the center, rather than at the bottom. A rectangular drawing or painting, by contrast, mimics the way we experience the world, a vertical orientation with gravity at the bottom, and a horizon line, real or implied, running across it horizontally. That center keeps exerting its influence, and you have to be careful what you put in there. You can’t hide anything in the corners, either. Which makes it difficult to fit a sprawling architectural space into it, let alone a road. Both of those things scream “horizontal! vertical!”

Here are some small sketches of my attempts at putting a freeway in a circle. 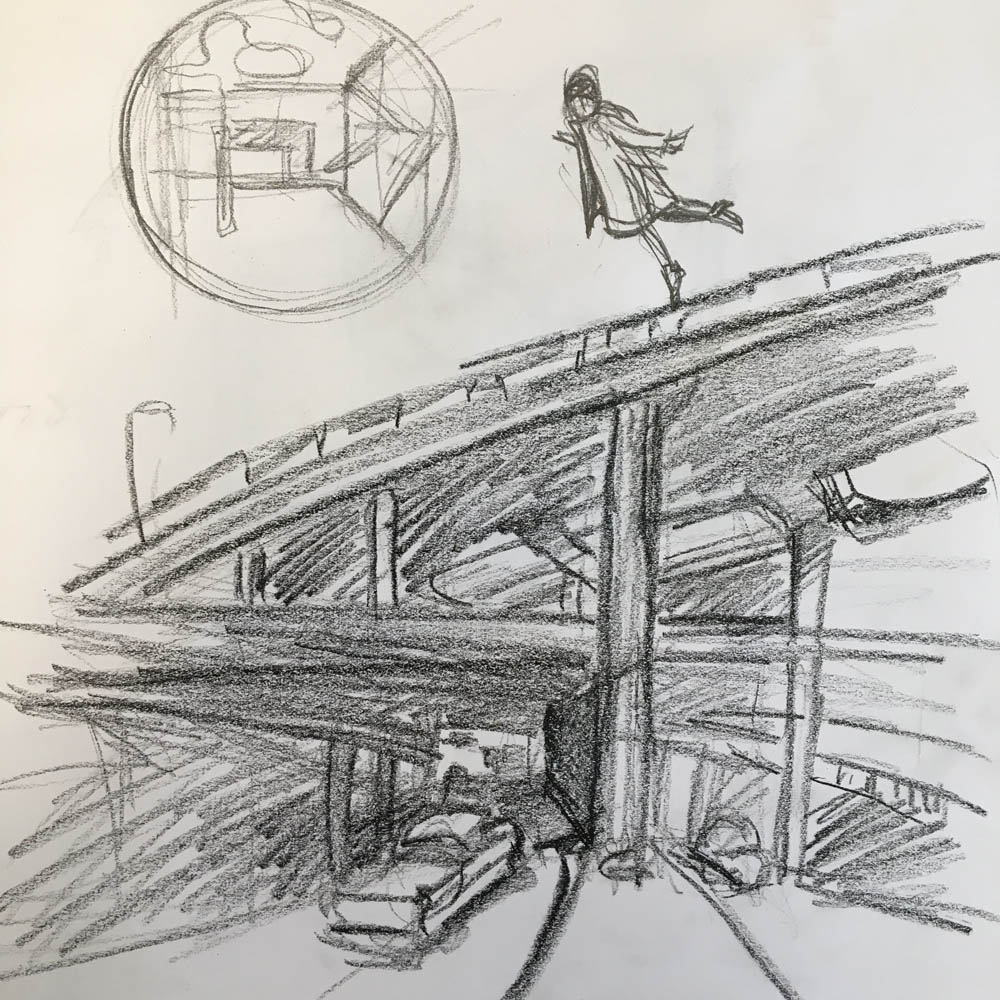 Why paint circles? Well, I have no idea why other artists do it, but I came to it arbitrarily. I had to ship a large, unstretched painting to Canada for my friend Lauren; she’d sold the work, by her late husband and my legendary studio-mate, Drake Deknatel. I rolled it up into a giant piece of cardboard tube, and then I needed end caps, i.e., circles. My handy partner and personal technical director Steve casually mentioned that I could cut them out of plywood by turning my router into a compass, using only a long, flat piece of plastic. Screw one end to the router base, and the other to the center of the plywood. The distance between the screws is your radius. Presto. Perfect circles in minutes.

I later exchanged the plastic for a fancier aluminum compass arm, to keep it from wobbling around on the bigger cuts: 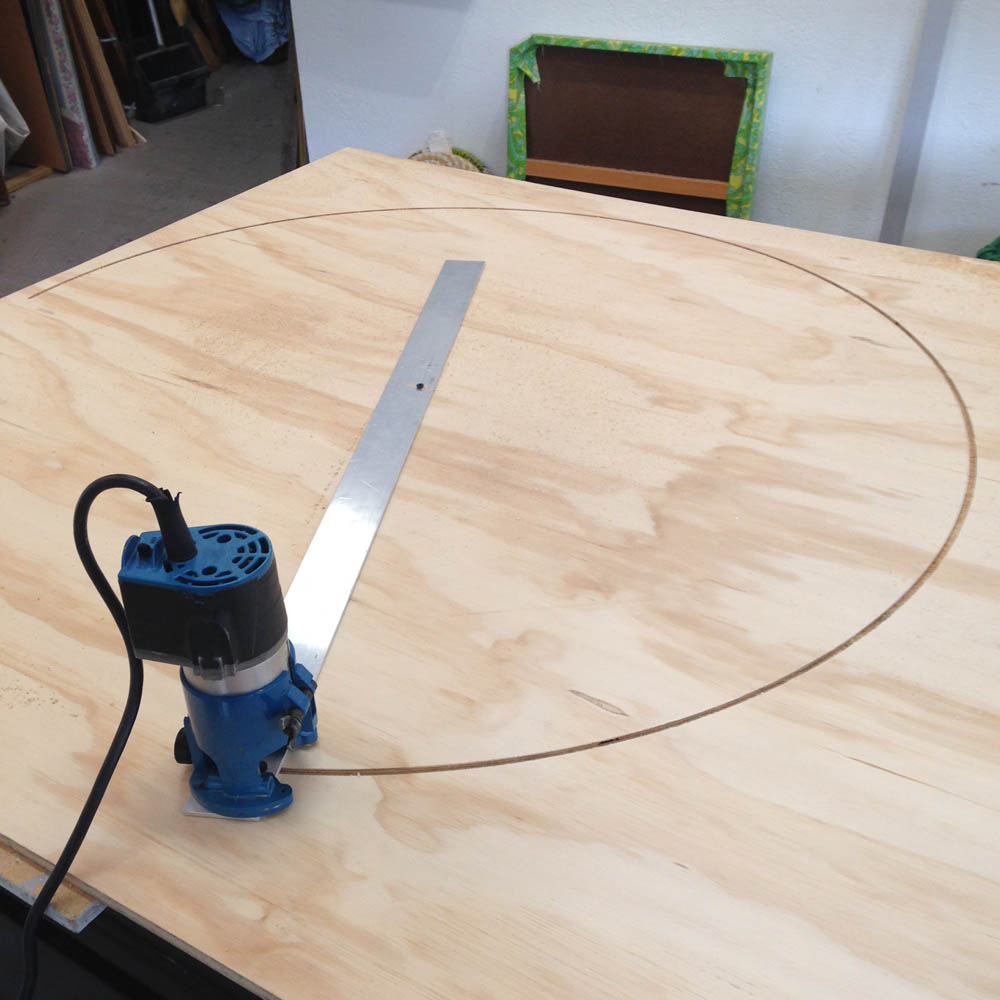 That’s the entire reason I started painting on circles, because I leaned how to make them.

The first set of circular paintings, or tondos, I made were a bunch of single objects in people’s hands. I’ve since progressed to more complex spaces and perspectives, starting small and working my way up to larger pieces. The new auto-pia paintings that will be in the show are 42″ in diameter. Here’s one on the table with just the fabric: 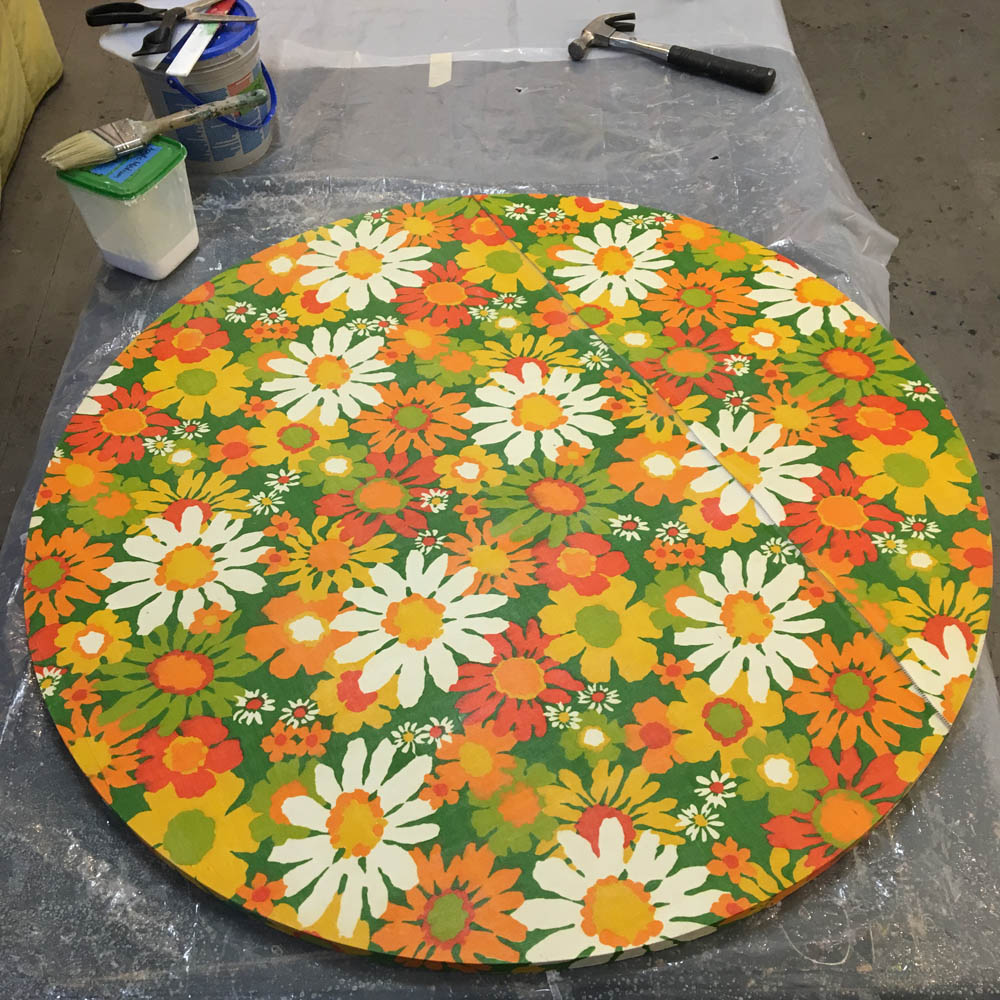 And another on the wall, further along. Note how the one-point perspective of the car interior sucks your eye into the middle. 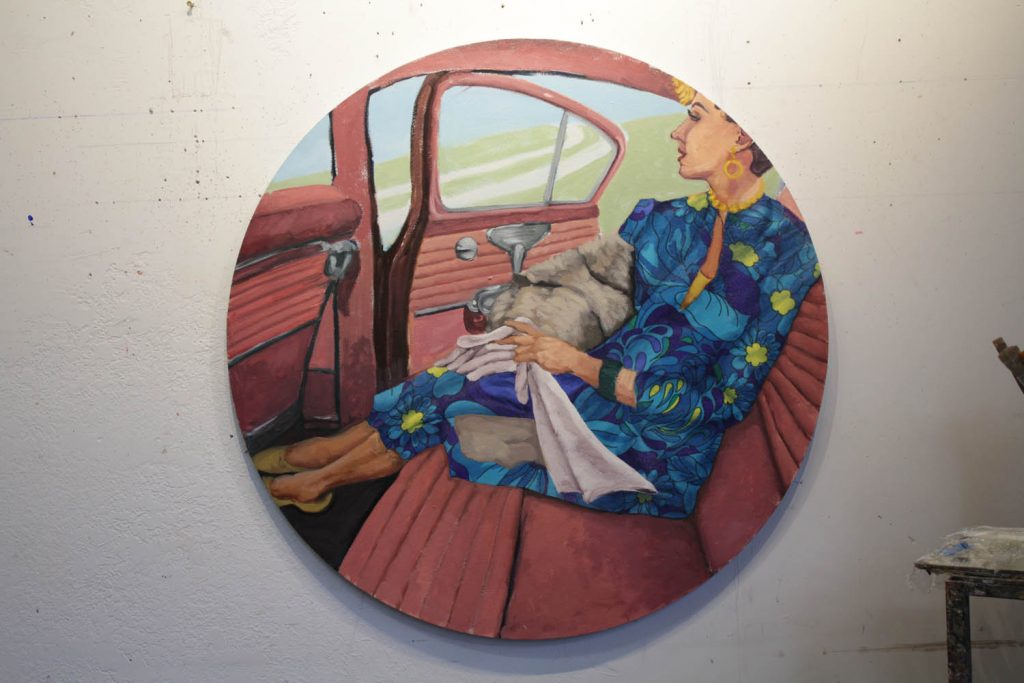 The finished works, and some paintings from the Manet/modern architecture series (it is an architecture office, after all), will be on view through April 26.